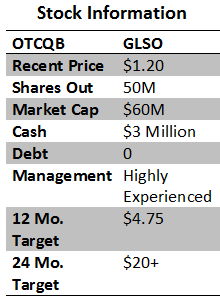 By the time you turn 40 years old, it is likely you will require reading glasses. This is an inevitable part of aging. Over time your eyes wear down and their ability to focus on near objects or images deteriorates. But you are not alone. In fact, you are part of one of the largest patient groups in the world. This medical condition, called Presbyopia, affects well over 1 Billion people globally.

Attempts to treat presbyopia, and equally attempts to ‘reverse’ aging have been in vain – reversing physical deterioration of the eye has proven a herculean task.

Which is why this little-known technology I’m about to describe has sparked a small uproar among ophalmologists, and other eye-care professionals.

GlassesOff (ticker – GLSO) could revolutionize how presbyopia is treated, all for 15 minutes a day, 3 days a week, for 2 – 3 months at most. Decades of research into neuroplasticity underlie a robust program that is developed as a ‘game’ that ‘trains’ your brain to better process near objects and images.

That’s a lot to take in at once, so let’s break it down:

The University of California at Berkeley (UC Berkeley) ran a clinical study on GlassesOff technology to determine whether or not adults age 40 to 65 could be rid of their reliance on reading glasses after using GlassesOff. The results were incredible:

The study was conducted by Professor Dennis Levi, Dean of the School of Ophalmology at UC Berkeley.

Besides the validation that came with Dr. Levi leading this study, the results were so shocking that there were published in the world’s most prestigious medical publication, NATURE Scientific Reports. The introductory paragraph reads:

“Presbyopia, from the Greek for aging eye, is, like death and taxes, inevitable. Presbyopia causes near vision to degrade with age, affecting virtually everyone over the age of 50. Presbyopia has multiple negative effects on the quality of vision and the quality of life, due to limitations on daily activities – in particular, reading. In addition presbyopia results in reduced near visual acuity, reduced contrast sensitivity, and slower processing speed. Currently available solutions, such as optical corrections, are not ideal for all daily activities. Here we show that perceptual learning (repeated practice on a demanding visual task) results in improved visual performance in presbyopes, enabling them to overcome and/or delay some of the disabilities imposed by the aging eye. This improvement was achieved without changing the optical characteristics of the eye. The results suggest that the aging brain retains enough plasticity to overcome the natural biological deterioration with age.”

Notice that, thus far, our findings mirror what was written about GlassesOff in NATURE.

Thus, we are able to conclude from these materials as sophisticated investors that GlassesOff is (1) revolutionary, (2) scientifically validated by the medical community, and (3) targets one of the most prevalent illnesses on earth. We also have (4) definitive proof that GlassesOff works to eliminate dependency on reading glasses.

GlassesOff is leveraging the biggest shift in the way consumers spend money since the personal computer went mainstream. Mobile computing and mobile connectivity is the future.  Everything is going mobile. Including GlassesOff.

GlassesOff will debut on the iOS platform, which will make it available initially to iPhone, iPad, and iPod users. This is a huge boon for the Company’s investors – since many technology companies are struggling to create a viable mobile business. GlassesOff will debut ahead of the curve and offer consumers a life-changing product at the convenience of their mobile device – anytime and anywhere they might be.  GlassesOff is specifically designed for mobile use.

A Game To End The Need For Reading Glasses

The technology underlying GlassesOff is robust. It is intuitive and personalized for every user – like a frame for your eye glasses. The difference, however, is you have the choice to be confined to using reading glasses, or playing a fun ‘complete the challenge’ type game for 15 minutes.

GlassesOff is designed to be user friendly and provide constant feedback in the form of scores depicting your level of achievement and progress in eliminating the need for your reading glasses. 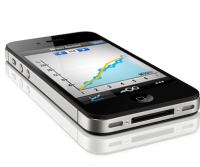 The design of the GlassesOff app makes it much more likely that consumers will quickly adopt the product as a must-have.

Lumosity Proves Viability of GlassesOff Model – And Then Some

Lumosity, the producer of web-based memory games has over 30 million paying users. That’s a staggering figure for a product with unproven benefits – there have been no studies validating the benefits of using Lumosity’s technology as with GlassesOff. Lumosity makes broad claims about hazy benefits and yet has raised over $67 Million from investors. Now imagine if they could cure one of the most prevalent diseases on earth.

GlassesOff Sees Media Frenzy – Could This Translate into Investor Frenzy?

GlassesOff has been an increasing targets of media frenzy – every network in the Western hemisphere wants to interview and feature GlassesOff. Among others, here are a few of the outlets that have already prominently featured GLSO:

However, the broader investment community has yet to realize GLSO is a publicly-traded company. Most are head-over-heels on the product, will use it themselves, or recommend it to a friend, and have COMPLETELY overlooked the quiet public debut GLSO made about a few months ago. As with other disruptive technologies, GLSO shares are unlikely to last at current prices.

In August, Shai Novik completed the sale of Prolor Biotech to OPKO Health for $575 Million. Investors who bought alongside Mr. Novik in 2008, when Prolor went public, reaped in excess of 700% return on their money. Novik has a proven track record of building SHAREHOLDER VALUE. This is crucial. And this is EXACTLY what legendary investors like Warren Buffett look for – stellar management. Buffett made his fortune on a handful of deals where he bet that the leaders at the top would execute and build tremendous value for him and other investors. GLSO, among others things, is a bet that a management team with a proven track record of value creation can do it all over again and build a MULTI BILLION DOLLAR enterprise with GLSO.

Below is a look at Prolor Biotech’s price chart from debut through to acquisition by OPKO. 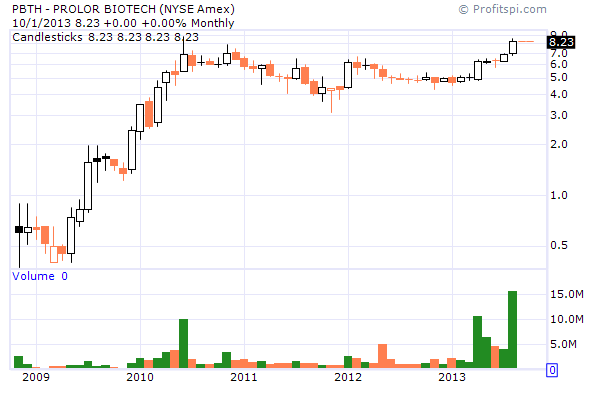 GLSO, while initially focusing on near-vision improvement, can potentially benefit memory and reaction time in a myriad of applications, among which Lumosity’s very existence could be threatened.

GLSO could also benefit patients with dyslexia, attention deficit disorder (ADD) and in general improve reading speed and reaction time for athletes. As a simple example, consider the benefits to a batter in a game of baseball where after using GLSO app their reaction time to a pitch is improved by even a half second. The implications are tremendous. GLSO could revolutionize more than just the near vision market – which in itself is worth billions of dollars.

GLSO is expected to debut their highly-anticipated GlassesOff app before year-end, which leaves only a few weeks at best. Much more likely, however, GLSO becomes the target of financial media that creates a whirlwind of interest and awareness among investors.

GLSO is highly differentiated, proven, and targets a MULTI BILLION DOLLAR OPPORTUNITY. Management has a proven track record of CREATING VALUE FOR INVESTORS. And, the Company is well-funded, with financiers in at current market prices. That means the INSTITUTIONAL MONEY is BULLISH and believes the stock price is going much higher.

While we would normally caution, the trading volume clearly shows that some prudent investor or investors have been accumulating the stock for the last two months. Perhaps this, then, is a signal that GLSO is a must-own, particularly before you own and start raving about the incredible GlassesOff app itself.

PLEASE NOTE WELL: microcaptechnology.com (“SCT”) and its employees are not a Registered Investment Advisor, Broker Dealer or a member of any association for other research providers in any jurisdiction whatsoever. None of the materials or advertisements herein constitute offers or solicitations to purchase or sell securities of the companies profiled herein and any decision to invest in any such company or other financial decisions should not be made based upon the information provide herein. Instead SCT strongly urges you conduct a complete and independent investigation of the respective companies and consideration of all pertinent risks. Readers are advised to review SEC periodic reports: Forms 10-Q, 10K, Form 8-K, insider reports, Forms 3, 4, 5 Schedule 13D. SCT is compliant with the Can Spam Act of 2003. SCT does not offer such advice or analysis, and SCT further urges you to consult your own independent tax, business, financial and investment advisors. Investing in micro-cap and growth securities is highly speculative and carries and extremely high degree of risk. It is possible that an investor’s investment may be lost or impaired due to the speculative nature of the companies profiled. In preparing these publications, SCT has relied upon information supplied by various public sources and press releases which it believes to be reliable; however, such reliability cannot be guaranteed. Investors should not rely on the information contained in this email and website. Rather, investors should use the information contained in this website as a starting point for doing additional independent research on the featured companies. SCT has been compensated fifteen thousand dollars by a third-party for distribution of this email. An affiliate of SCT receives twenty thousand dollars monthly from Glasses Off for IR, PR and business development services. Never invest in any stock featured on our site or emails unless you can afford to lose your entire investment. The advertisements in this email and website are believed to be reliable, however, SCT and its owners, affiliates, subsidiaries, officers, directors, representatives and agents disclaim any liability as to the completeness or accuracy of the information contained in any advertisement and for any omissions of materials facts from such advertisement. SCT is not responsible for any claims made by the companies advertised herein, nor is SCT responsible for any other promotional firm, its program or its structure. Companies mentioned herein carry a high degree of investment risk; readers should carefully review the companies thoroughly with their registered investment advisor or registered stockbroker. We are not liable for any investment decisions by our readers. We encourage our readers to invest carefully and read the investor information available at the web sites of the U.S. Securities and Exchange Commission (SEC) at www.sec.gov and the National Association of Securities Dealers (NASD) at www.nasd.com.